At a Chinese-run hospital in Zambia, some employees watched as people who recently returned from China showed up with coughs but were not placed in isolation. A doctor tending to those patients has stopped coming to work, and health workers have been ordered not to speak publicly about the new virus that has killed hundreds.

The virus that has spread through much of China has yet to be confirmed in Africa , but global health authorities are worried about the threat to the continent where an estimated 1 million Chinese now live, as some health workers on the ground warn they are not ready to handle an outbreak.
Countries are racing to take precautions as hundreds of travellers arrive from China every day .
Safeguards include stronger surveillance at ports of entry and improved quarantine and testing measures across Africa, home to 1.2 billion people and some of the world’s weakest systems for detecting and treating disease.

But the effort has been complicated by a critical shortage of testing kits and numerous illnesses that display symptoms similar to the flu-like virus.

“The problem is, even if it’s mild, it can paralyse the whole community,” said Michel Yao, emergency operations manager in Africa for the World Health Organisation.

Those growing worried include employees at the Sino-Zambia Friendship Hospital in the mining city of Kitwe in northern Zambia, near the Congo border. Chinese companies operate mines on the outskirts of the city of more than half a million people. One company is headquartered in Wuhan, the city at the centre of the virus outbreak. Hundreds of workers travelled between Zambia and China in recent weeks.

“We’re definitely not prepared. If we had a couple of cases, it would spread very quickly,” physiotherapist Fundi Sinkala said. “We’re doing the best we can with what resources we have.” 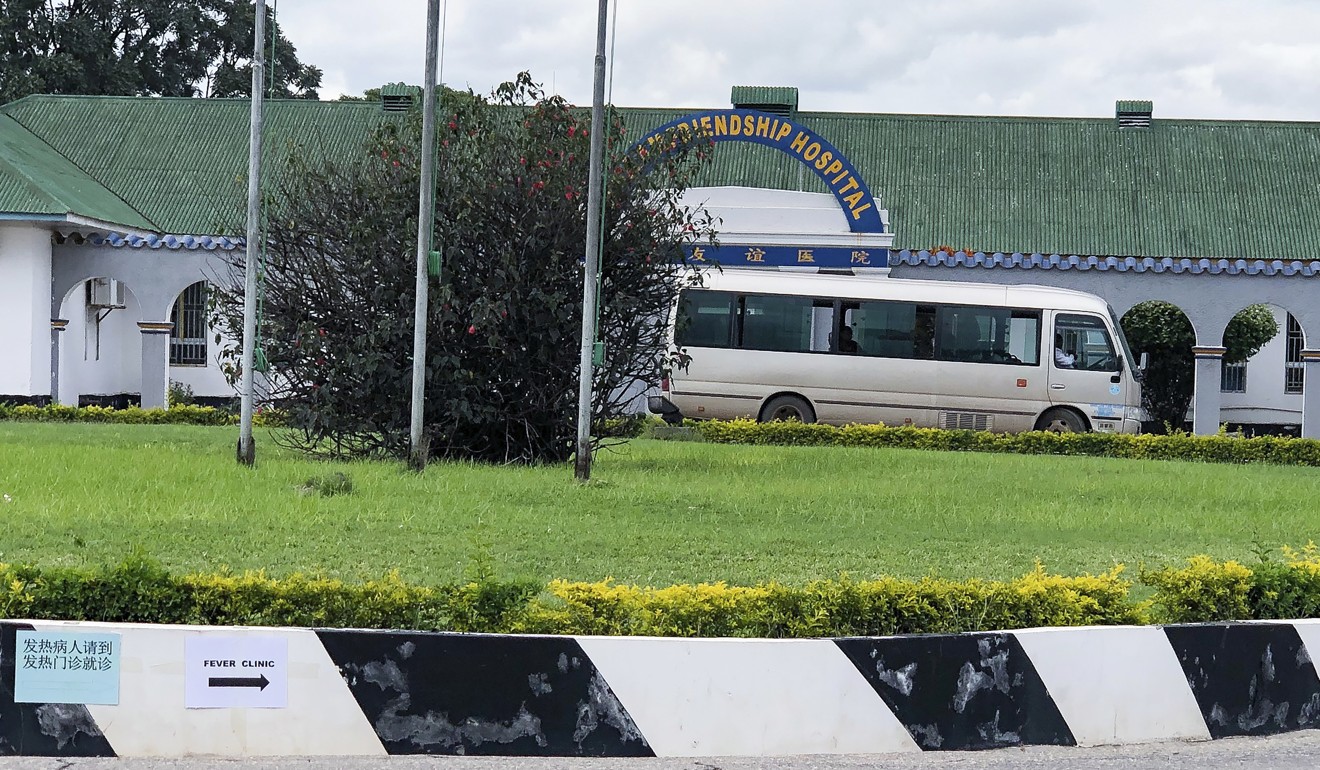 The Sino-Zambia Friendship Hospital in Kitwe, Zambia, has set up a fever clinic.

The Sino-Zambia Friendship Hospital, or Sinozam, a low-slung facility near the city’s train station, has taken some precautions, including checking the temperature of patients with infrared thermometers and establishing isolation areas. Employees wear masks. Gloves, disinfectant and oxygen inhalers have been stockpiled. Sinozam treats many Chinese in Kitwe and its precautions go further than other hospitals in the area.

But the employees and others familiar with the matter, some of whom spoke anonymously under the new rules, say some Chinese patients checked in with coughs and fevers but did not get placed in isolation.

Visiting Zambian health officials concluded the patients did not merit special treatment and did not take samples to test for the virus. After the people recovered, they were sent home with antibiotics, employees said.

On Wednesday, the hospital set up a new fever clinic, where people arriving with a high temperature are now taken to right away. It was “unfortunate” the ward wasn’t set up earlier, Sinkala said.

Two people familiar with the matter said a doctor tending to the sick had fallen ill. Dr Yu Jianlan had not come to work in the past week and hospital administrators had not explained her absence, Sinkala said. The other person spoke on condition of anonymity for fear of retribution.

Hospital administrator Li Zhibing said there were no patients with a fever and said Yu had a urinary tract infection, not a fever. But a notice posted by the Zambia-China Cooperation Zone, which manages the hospital, quoted an employee as saying on January 27 that the facility “probably sees 120 fever patients a day, and at least 70 of them are carrying germs” of various diseases.

Earlier this week, a Zambian official acknowledged for the first time that his country was following up on an unspecified number of suspected cases. Zambia is one of 13 African countries identified by the WHO as a high priority because of busy travel links with China.

Copperbelt provincial health director Robert Zulu, who oversees Kitwe and the surrounding region, said he would not discuss details, citing privacy. But he added, “when any case is confirmed, you will be informed”.

Crucially, no one in Zambia has been able to test for the virus so far. Like most African countries, it has been waiting for a substance known as a reagent, which laboratories require to confirm whether a patient is infected. Laboratories in just six of Africa’s 54 countries were equipped as of mid-week. That means a wait of two or more days to know whether a sample shipped to South Africa or even outside the continent tests positive.

Without testing, officials are “just relying on the symptoms“ and whether they persist. “But from what we are learning right now, some people show hardly any symptoms at all,” Sinkala said, calling that the hospital’s biggest worry.

Zambia is one of the additional countries the WHO planned to equip by the end of the week. As of Friday, WHO emergencies chief Mike Ryan said 28 labs across the continent could diagnose the new virus.

Adding to concerns at Sinozam, three employees said Zambian health officials visited on Tuesday and had been testing the bodies of two Chinese patients that had been in the morgue for days, though some added it was out of an overabundance of caution.

Li, however, dismissed the accounts of testing the bodies as “rumours”. He said one person died last month of malaria and the other of a heart attack. The bodies were still there because family members in China wished to come and pay respects but could not do so because of the outbreak, he said.

Zambia’s health ministry spokesman Abel Kabalo, called the employee accounts of events at the hospital “very strange”. He said that if Zambia confirmed a case, authorities “will definitely inform the world”.

The WHO says countries are obligated to inform it of any confirmed cases and are requested to report suspected cases as well. The WHO chief has publicly urged countries to share information. So far, African countries appeared to be complying, WHO adviser on health security Ambrose Talisuna said.

Several African nations such as Ghana, South Africa and Ethiopia have announced their precautions, including updates on negative test results for suspected cases and demonstrations of surveillance and quarantine capabilities. Ethiopian Airlines, however, faces questions by some in Africa about why it continues to operate more than 30 China flights a week while other African airlines have suspended theirs.

Adding to the difficulties in diagnosing the new virus are numerous diseases in Africa with symptoms that include fever or coughing or both.

It was impossible to diagnose the new virus by symptoms alone, Gates Foundation CEO Mark Suzman said, adding that there was a “significant likelihood” that the virus would be confirmed in Africa. And there was a risk that “panic overtakes good public health and good science”.

The foundation has committed up to US$20 million to help health authorities in Africa and South Asia, another vulnerable region, improve their disease surveillance, isolation and treatment for the virus.

Concerns are high among some in Kitwe. Pharmacy manager Edward Goma, estimated that his business had sold more than 800 face masks in the past few days.

“So far everyone is scared,” he said. And yet he has not noticed the stricter surveillance measures seen in other countries, beyond temperature checks at the international airport an hour’s drive away.

The 15th Metallurgical Construction Group, based in Wuhan, said on its website that its overseas operations in Zambia and Congo must buy masks, disinfect living quarters and workspaces daily and check workers’ temperatures three times a day.

Chinese employees were temporarily barred from returning to Africa, while those in Zambia were not allowed to go to China, said Li, the hospital administrator.

Chinese embassies in Zambia and elsewhere in Africa have been unusually outspoken, giving news conferences and television interviews to discuss their response to the outbreak. Embassies require arriving Chinese citizens to declare where they have been in China. They also urge citizens to voluntarily isolate themselves for 14 days.

“We are now practising hygiene, even in the mines,” said Joseph Chewe, the Kitwe-based president of the Mine Workers Union of Zambia. “Any report of a person with coronavirus here will be very disastrous.”

Jubaland And Puntiland Call For…