The Ruling on the appeal the National Chairman of the All Progressives Congress (APC), Adams Oshiomhole filed challenging his suspension has been adjourned indefinitely. 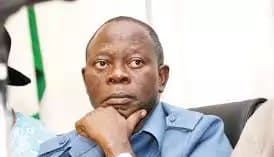 The Abuja division of the Court of Appeal made the adjournment on Friday.

The court had on Monday stayed the execution of the judgment of the High Court of the Federal Capital Territory (FCT) that suspended Oshiomhole from the party.

Justice Abubakar Yahaya-led three-man panel of the Appeal Court, had then restrained the respondents in the appeal from proceeding to act or take any further steps with regards to the ruling of the FCT High Court.

It said Oshiomhole should be allowed to continue as the APC chairman pending the hearing of his appeal challenging his suspension.

It had then slated Friday, March 20, to hear the matter.

However, when the parties returned to the court as fixed, a clerk of the court announced that the panel would not be able to sit.

How Iran’s closeness with Venezuela…

After months of talks in…

Malian and “white” forces were…

A fuel shortage in Tigray…

The dramatic turnaround in Muktar…

The UN force confirms a…

After Russia visits, the United…

In Guinea-Bissau, Macron was warmly…

A new constitution in Tunisia…

Transformation Of The Ennahda Movement…

The African Union has chosen…