World Heavyweight Champion, Anthony Joshua has given a rousing speech in London in front of the Royal Family in which he spoke about his Yoruba roots and Nigerian heritage.

He spoke on Monday night during the Commonwealth Day celebration service held at Westminster Abbey.

“My name is Anthony Oluwafemi Olaseni Joshua and like many of you here, I’m a child of the Commonwealth.

“I was born in Watford and my heritage is Nigerian.

“I come from the Yoruba people who are the largest and some might say the loudest ethnic group in all of Africa. 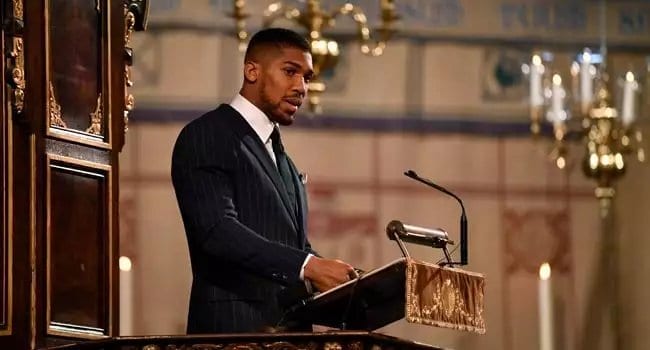 Anthony-Joshua meets the Queen at the end of the event

“I join a long line, perhaps too long to count, of UK citizens of Commonwealth origin who’ve made enormous contributions to this great, multicultural society of ours.

“In my world, that would include names such as Joshua Buatsi, Lawrence Okolie and Ramla Ali.

“Like me, so many children of the Commonwealth have two homes, two identities, two cultures and two ways of viewing the world. Some even have more than two.

“It takes a village to raise a child and in the same vein it takes a whole community to stand together to tackle some of the challenges we are confronted with today.

“In the same way boxing gave me the opportunity and framework to become Olympic champion, Commonwealth champion and now heavyweight champion of the world.

He ended the rousing speech by toasting to the Commonwealth, using his favuorite meals as symbolisms.

“So, here’s to fish and chips and egusi soup and pounded yam, to the UK and Nigeria and to the children of the Commonwealth,” Joshua said.

Some of the Commonwealth’s top entertainers and sporting stars joined Queen Elizabeth and other members of the Royal Family at the multi-faith service to celebrate Commonwealth Day.

It was attended by more than 2,000 people in London’s Westminster Abbey.

The service was attended by the head of the Commonwealth, Queen Elizabeth II, as well as its Secretary-General, Patricia Scotland.

Williams holds no regret for…

Africa Super League: All you…

How To Become A Professional…