Turns out, mobile data isn’t the only data in South Africa that is expensive. In comparison to the rest of the world, fibre is too – really, really expensive.
A new survey by Picodi.com looked at pricing from 233 fibre internet providers in 62 countries and found that South Africans pay the most for 100 Mbps uncapped fibre in their homes.
South Africans will on average fork out an astounding R1,273.84 ($87.24) per month. 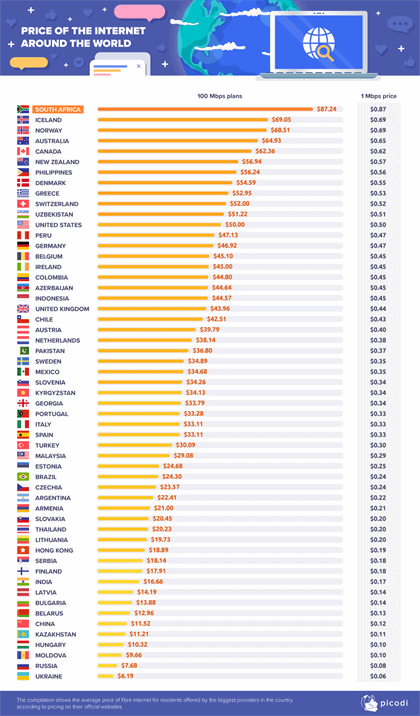 Source Picodi.com
The next closest contenders according to the survey are almost R270 behind with Iceland paying an average of R1,008.24 $69.05 and then Norway at R993.64 ($68.51).
The cheapest costs can be found in Eastern Europe. Countries like Moldova pay R146 ($10/month), Russia R117 ($8/month) and Ukraine R90 ($6/month).
The South African averages were sourced from five internet providers: Active Fibre, Axxess, Webafrica, SkyFi as well as Vanilla.
See also: Vodacom and MTN are ripping off data customers, the Competition Commission says. Here’s why it thinks they stay anyway.
The report looked at nationwide internet providers offering unlimited residential fibre internet or the most advanced technology available in the country. It included prices applicable after the end of a limited-time promotional rate. It excluded bundles consisting of several services, like internet plus television or internet plus paid streaming services.
The survey comes fresh off a scathing report by the
Competition Commission that found Vodacom and MTN are over-charging customers by as much as 30% to 50% on mobile data.