Authorities in Gambia on Friday begun a hunt for 14 people who broke out of a hotel in Banjul where they had been quarantined for COVID-19.

The group was among 32 passengers who arrived from the United Kingdom on Wednesday. 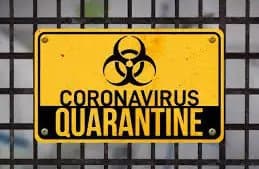 Gambia’s Director of Health Promotion and Education said the escapees complained of the size of their hotel rooms.

“They also complain about the room size, that’s a typical hotel room size. But because of the fact that they just dont want to stay there, they dont want to be quarantined and that was why they are making all of these allegations on the Minister of Health”, he added.

Gambia recorded its first case of the coronavirus on Tuesday from a woman who flew in from the United Kingdom.

On that same day President Adama Barrow closed schools and placed arrivals from worst hit nations in quarantine as some measures to curtail spread of the virus.

5 Most Dangerous Cities of…

Africa: WHO raises concerns over…

Congolese refugees are reluctant to…

Boko Haram militants would be…